Most Catholics are familiar with these words from the hymn, “Bring Flowers of the Rarest,” sung at the May Crowning.

But why is Mary the “Queen of the May?” Why is May the month of Mary and not June, or October, or any other month?

The Meaning Behind May 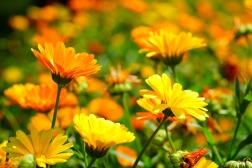 May stands apart from all other months as the time when nature truly comes to life. Trees blossom, flowers bloom, life springs anew. Whereas March and April can be fickle and wavering in their climate, May is a month of beauty and hope.

The beauty of May was not lost upon the ancients. The Greeks dedicated the month to Artemis, their goddess of fecundity, while the Romans honored their goddess Flora during this time.

Many other pre-Christian countries developed their own May traditions as a way to dispel the darkness of winter and embrace the light of spring and summer.

May in the Catholic Church 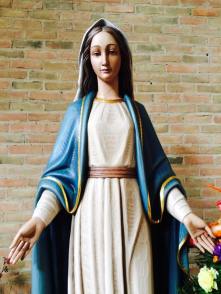 During the Middle Ages in Europe, the idea arose that Mary should have a month dedicated to her. A practice known as the Tricesimum, or “Thirty-Day Devotion to Mary, developed. It became known as “Lady Month” and was held from August 15-September 14.

Around this time, some were beginning to make the connection between Mary and May. King Alphonsus X of Castille, in his collection of songs called, “Cantigas de Santa Maria” celebrates May as Mary’s month.

In the late 18th century, Father Latomia of the Roman College of the Society of Jesus began the practice of formally dedicating May to Mary in order to promote devotion to her among his students.

This devotion continued to spread throughout the Church, and, in 1815, Pope Pius VII granted a partial indulgence to those who publicly or privately honored Mary during the month of May. Pope Pius IX made it a plenary indulgence in 1859.

Mary is also connected to May through various feast days including, The Visitation, Our Lady of the Most Blessed Sacrament, Our Lady Queen of Apostles, and Our Lady of Fatima.

Why is Mary Crowned?

The Catholic Church teaches that Mary was crowned Queen of Heaven, which is the fifth glorious mystery of the Holy Rosary.

Mary receives this title because she is a perfect follower of Christ. According to the Catechism of the Catholic Church:

“[The] Immaculate Virgin, preserved free from all stain of original sin, when the course of her earthly life was finished, was taken up body and soul into heavenly glory, and exalted by the Lord as Queen over all things, so that she might be the more fully conformed to her Son, the Lord of lords and conqueror of sin and death” (CCC:966).

Mary’s queenship is the reason for May Crownings, which gained popularity in the 19th century. In August 1838, Pope Gregory XVI added crowns to a painting of Mary holding the Child Jesus called the Salus Populi Romani (said to have been painted by St. Luke). After that, the practice spread and was moved to May.

Today, parishes will crown a statue of Mary with a wreath of blossoms, which represents her virtue. Often, children making their First Holy Communion will lead the crowning, and a girl from the class will have the honor of placing the crown atop Mary’s head.

In addition to having a May crowning ceremony, many parishes decorate a May altar with a statue or picture of Mary. It is used throughout May for various prayers and devotions to the Blessed Mother, including the Rosary, the Regina Coeli, and the Litany of Loretto.

Catholics can and should honor Mary all year round, but May is an especially fitting time to develop a devotion to her.

This May, consider adding a Marian devotion to your life. Maybe it’s a daily or weekly Rosary. Maybe it’s spending some quiet time in front of a May altar at your church or attending the May Crowning.

Whatever you do, it will be pleasing to Jesus that you are honoring His mother, and He will bless you and shower you with graces.

The May Crowning at St. Mary Mokena will take place on Sunday, May 5th during the 11:00 am Mass.

>> NEXT: Learn More About Marian Devotions