While many parishes have a choir program, few focus on sacred music, and even fewer create their own album. For St. Mary Church in Mokena, however, sacred music has become such a defining characteristic of parish life, that an album became the natural next step.

“Over the past few years, our church choirs have grown into a wonderful sacred music program,” explains Father Dindo Billote, pastor of St. Mary. “We decided to highlight the beauty of this music by creating an album that people can download or take home to help them pray anywhere.”

In his six years as pastor, Father Billote has championed the restoration of Catholic traditions at St. Mary. The parish holds a Corpus Christi procession each year to evoke the sacred beauty of ages past. Antiphons chanted before each Mass are another example, helping prepare the congregation for participation in the holy sacrifice.

These revived traditions are all supported by the parish’s sacred music program. Unlike the more popular music heard at many parishes, sacred music is designed purely for divine worship and emphasizes chanting and polyphony. It is the traditional music of the Church, dating to before the middle ages. 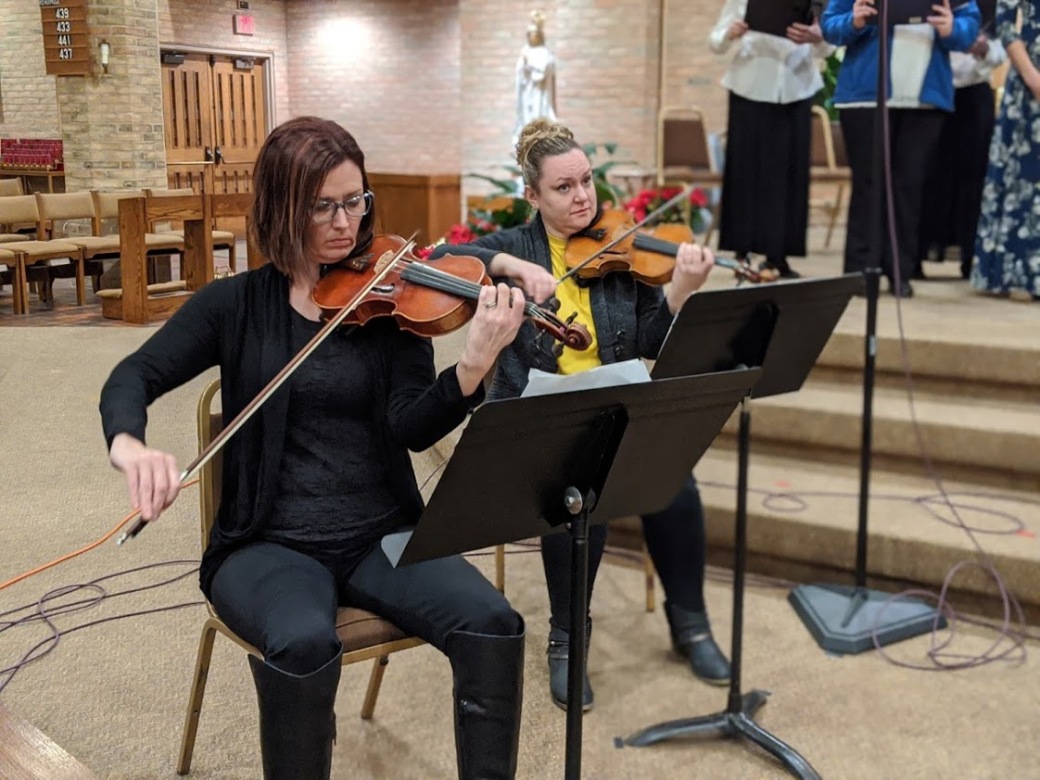 “Sacred music and tradition is very precious because it’s in such short supply today,” explains Simonetta-Marie Pacek, Associate Director of Sacred Music at St. Mary. “The Catholic Church has a long and beautiful musical heritage that many people don’t realize due to the dominance of contemporary hymns. Bringing some of this heritage to the community through our sacred music album is something we feel very strongly about.”

The album recording took months of special preparation and rehearsals by all the church choirs, in addition to regular practices. “In a recording, any errors are there forever, so you need to keep trying until it’s perfect,” explains Megan Gerhardstein, who plays the violin. “The amount of concentration it took to record was far more than when playing live, but the resulting high quality made it all worth it.”

Each of the parish’s four choirs are featured in the album, including the Ave Maria Adult, St. Casimir Chamber, St. Cecilia Schola, and Cherubim Children’s Choir. “It was very rewarding and beautiful to see how hard the choir members worked for so many months and how much their musicality has grown,” said Anna Pacek, Director of Sacred Music at St. Mary.

Among the album’s songs are Mozart’s Ave Verum, Handel’s Hallelujah Chorus, and Franck’s Panis Angelicus. The album’s official name is Ave Maris Stella, which translates to “Hail, Star of the Sea” and represents the Blessed Mother guiding people to Christ.

“Just like St. Mary the Star of the Sea, we hope this album guides listeners into deeper contemplation and prayer,” explains Anna Pacek. “We want them to feel closer to God.”